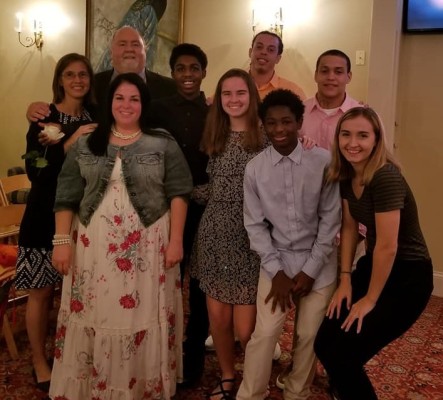 “The special courage it takes to experience true belonging is not just about braving the wilderness, it’s about becoming the wilderness. It’s about breaking down the walls, abandoning our ideological bunkers and living from our wild heart rather than our weary hurt…We’re going to need to intentionally be with people who are different from us. We’re going to have to sign up, join and take a seat at the table. We’re going to have to learn how to listen, have hard conversations, look for joy, share pain and be more curious than defensive, all while seeking moments of togetherness.”[1]

My 20-year-old son died two weeks ago. He died of an accidental gunshot wound. Someday I may write about that – our country’s sick fascination with guns and what it is doing to us – but today is not that day. Today, I want to talk about this quote from Brene Brown’s book, Braving the Wilderness. That may seem somewhat out of left field, but if you bear with me it will eventually make sense (I hope).
I first read Brown’s book at the beginning of 2018. It had a profound effect on me, as you can see from this facebook post:

I wanted everyone in this country to read it, because I think she points to a way through the deep division, hate speech, general lack of empathy, and increasing tendency to dehumanize one another that is fast coming to define us as a nation. The quote above is a pretty good summary of her overall thesis.

We find true belonging and community, not when we surround ourselves with people who look like we do and think like we do, but when we stay true to our own values and ideals, while also entering into real (not surface) relationships with people whose values and ideals differ from our own. Only when we see “the other” as truly human, as having intrinsic human value equal to our own, while also staying true to ourselves, do we truly find a sense of belonging in the world. The more deeply we come to understand those who are different from ourselves, the more strong our own sense of self becomes, and the more we are able to be who we are, without tearing down someone else.

So she had me already. Then, in the week of Tyson’s death, I lived what she is talking about here: breaking down walls, intentionally being with people different from myself, listening, having hard conversations, looking for joy, sharing pain, being more curious than defensive, and seeking moments of togetherness. And let me tell you, I couldn’t have gotten through that week any other way.

We adopted Tyson from foster care when he was nine years old. His story and his birth family’s story are not my stories to tell, so I won’t go into detail about any of that. But I will say, after he turned 18, he reconnected with his birth family and that ended up being an extremely positive thing for his life. By the time his birth mother reached out to me about seeing him, it was clear that she had made tremendous strides in her life, and to this day, I am in awe of her strength and her ability to turn her life around so completely.

She and I come from very different life experiences, but ever since she came back into Tyson’s life we have shared the connection of our love for him. She and I rarely saw each other over the past few years, but we talked occasionally and texted somewhat regularly. That connection, however tenuous it might have seemed given our differences, was strong enough that when she received the news about Tyson being shot, I was her first phone call. And so began a painful journey together that forged what I know will be lasting bonds between not just she and I, but also my husband and other kids, and her other sons, and Tyson’s extended birth family.

The thing is, this whole experience could have gone very differently and much more painfully. What if, when she called me out of the blue in 2015, I hadn’t been willing to listen to her story and instead threw up walls between us? What if she hadn’t had the courage in the first place to make that phone call and be vulnerable with me without even knowing me? What if all of us who descended on that hospital for 3 days straight had been defensive with one another instead of curious to know these other people who Tyson also loved? What if Lorrie and Kerry and I hadn’t been willing to have the hardest of conversations at one o’clock in the morning in an ICU waiting room about the realities of the situation, next steps, arrangements, etc. so that we could make the decisions together rather than fighting each other for control?

Think about it. Those three days at the hospital could have been a nightmare for everyone. Just imagine the scenarios that could have taken place with two families who refused to be open to one another or accept each other staking their claims to this young man whose life was ending too soon, instead of supporting each other, grieving together and loving each other. I will be forever grateful that is something we didn’t have to find out.

Brene Brown says that “the foundation of courage is vulnerability – the ability to navigate uncertainty, risk and emotional exposure.”[2] I believe all of us who spent those three days at the hospital together showed tremendous courage in the way we chose to be vulnerable with one another. And I also found it to be a sacred experience. My daughter Grace said, “After all this pain and grieving, Tyson brought us together with people we now get to call family that love him as much as we do, and for that I am so thankful.”

I too, am so thankful for the gift of the relationships that emerged from an otherwise deeply painful time. But even beyond the sheer gratitude of the experience, I also feel compelled to share our story to illustrate the truth of Brene Brown’s powerful words. I am just not sure what is going to become of our country if we can’t find the courage to be vulnerable with strangers, to break down walls, learn how to listen, have hard conversations, look for joy, share pain, be more curious than defensive, and seek moments of togetherness.

Instead of continuing to dehumanize those who are different from ourselves, we must begin to “rehumanize” the strangers among us. At some point we have to learn how to be in relationship with people we can’t necessarily relate to. It is easy for an adoptive family to simply write off a birth parent who had her children taken away, to dehumanize that person as less than worthy. It would also be easy for a birth parent to feel resentful of an adoptive parent, for taking on a role they felt was rightfully theirs, for having years of experiences with their child that they missed out on. But if we had done this with each other, Tyson would have missed out on reconnecting with a part of himself and we would have missed out on knowing some truly wonderful people.

Brene Brown said, “An experience of collective pain does not deliver us from grief or sadness; it is a ministry of presence. These moments remind us that we are not alone in our darkness and that our broken heart is connected to every heart that has known pain since the beginning of time.”[3]

In those days at the hospital spent with Tyson’s birth family, we engaged in a ministry of presence with one another. My broken heart connected with Lorrie’s broken heart. Today it connects with the broken hearts of immigrant mothers whose children are being ripped away from them at the border, it connects with the mothers of Michael Brown and Tamir Rice and every other mother who has lost her child. That doesn’t deliver me from grief or sadness, but it reminds me that I’m not alone. And it reminds me of my deep human connection to every mother on this planet. Regardless of race, class, nationality, culture, language or any other difference that may separate us, we are one human family. And we need to start acting like it. The way we begin doing that is by taking a seat at the table, joining in, learning to listen, having hard conversations, looking for joy, sharing pain, being more curious than defensive, and seeking moments of togetherness. It isn’t easy, but I am here to tell you, it is absolutely worth it

I am a pastor of 5 churches, a mom of 6 kids and 3 dogs, and a wife of one man, with a passion for creating a more just society. I write from the perspective of a privileged white cis female who parents black sons and white daughters. I strive for intersectionality in my work but am quite sure I fall short at times. I welcome open dialogue with those who disagree with me if it is genuine, respectful and not dehumanizing of others in any way. View all posts by justicejottings

One thought on “Courage, Vulnerability and Connection”